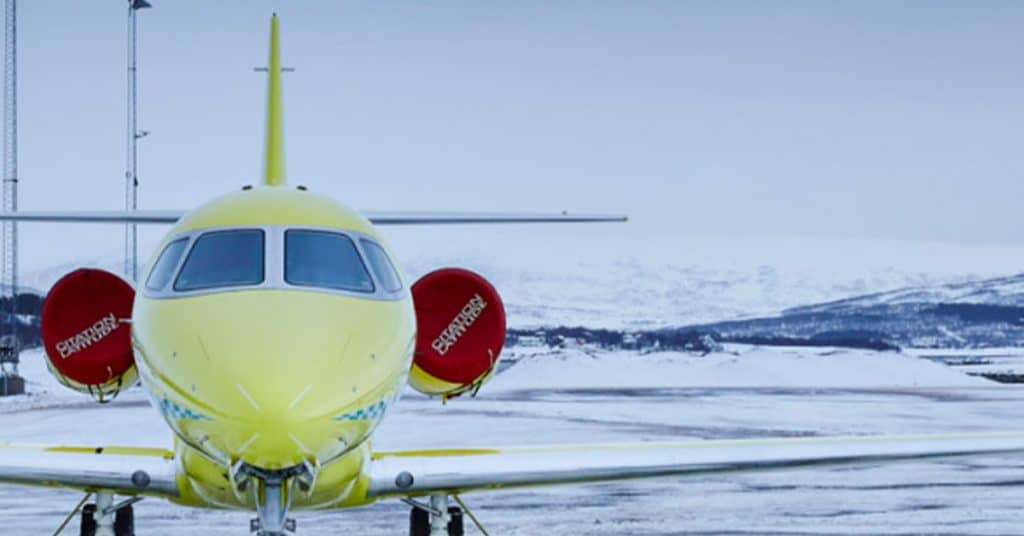 Flying ambulance fleets save lives every day, transporting patients from their homes or the site of an incident to hospitals and other medical facilities. Around the world, there are scores of air ambulances in the air at any one time. Their cargo is precious and their missions are often life and death – literally. It means the fleets have to fly through all sorts of conditions to get wherever they’re needed.

The 11 planes of the Scandinavian Air Ambulance (SAA), which operates throughout both the populated and remote reaches of Norway and surrounding countries, make up one such air ambulance fleet. Partnered with Babcock Norway for flight monitoring, the SAA assists upwards of 20,000 people each year.

Due to the importance of Babcock SAA’s work, it required a robust solution to give it world-best-practice position reporting – a solution Skynet Aviation was more than equipped to provide.

The transportation of people via air ambulance has been commonplace in Norway since the 1930s. Because the country is rugged and the environment is often hostile, air travel just made sense and medical flights were a natural part of this. Eventually, in 1988, the modern SAA was established. Today it is made up of 11 ambulance airplanes situated at seven locations throughout Norway:

All these air ambulance bases provide readiness 24 hours a day, 354 days a year. Of the roughly 20,000 total patients SAA assists per annum, around half are transported by the air ambulance fleet. Overall, the SAA plane fleet logs around 18,000 flight hours per annum.

Each air ambulance plane carries advanced medical equipment and is staffed by two pilots and a flight nurse. When required, a doctor also flies, either to treat a patient after landing or to attend them during the flight. Each aircraft has a capacity for patients in stretchers.

The Babcock SAA operates across Swedish, Finnish and Norweigan airspace, serving the governments of all three countries. Due to this challenging theatre of operations – which straddles the Arctic Circle and includes the 1700km-long Scandinavian Mountain Range and the Baltic Sea – the air service operations has had to establish impeccable all-weather operating infrastructure, both in the air and on the ground.

Both aircraft types have custom-designed medical interiors and are specced to operate in Scandinavia’s harsh and freezing environment. The King Air 250 fleet features CAT II capability allowing it to operate in reduced visibility and has steep approach landing capability, ensuring the plane can operate from tight runways.

The Cessna Citation Latitude is the first of its kind used in a medical configuration. Its high speed and long range allows SAA to transport patients further and faster than ever before, negating the need for stopovers and dramatically reducing the overall time taken to move a patient to a specialist care unit.

The main mission of these aircraft is planned patient and/or doctor transport. Emergency response actually comprises a minority of the flights; however, when this does occur it takes urgent operational precedence, requiring precise to-the-second tracking.

Babcock was awarded the air ambulance support contract for SAA in 2018, with operations starting in the Northern Hemisphere summer of 2019. However, the handover was not perfectly straightforward. The previous operator of the SAA contract had implemented a custom-built positioning solution for aircraft tracking. When they exited the contract, they took it with them. This left Babcock Norway in a bind as they tried to close the gap left by the previous operator’s system.

Without access to the aircraft positioning and tracking solution of the previous contract holder, Babcock Norway knew it needed to develop, source or build the same or better capabilities in order to service the SAA contract. The system would have to handle a diverse operating environment that could be incredibly hostile. In Norway, where temperatures can be as low as minus 50 degrees – meaning hypothermia and frostbite in as little as 5 minutes – to-the-second flight tracking is a necessity.

Further, SAA already used Avinet Air Maestro to handle crewing and rostering, so any positioning solution would have to work in tandem with that existing system. The resultant issue was one Babcock couldn’t solve themselves, so in 2018 they entered into talks with Australia’s SkyNet Aviation® to see what might result from their combined capabilities.

SAA’s unique requirements meant a unique solution – something SkyNet thrives on. In 2019, the technology company set about the task of delivering a data fusion of ADS-B, satellite, and 4G tracking across all 11 SAA planes. The solution is based around a process called cross-data integration (XDI), that allows Babcock to track and position the SAA fleet on an average reporting interval of just seconds and do it at a reasonable cost.

What XDI does is combine multiple data sources which all have different kinds of signal outputs – in this case satellite, ADS-B, and cellular – and bring them together into one unified data stream per aircraft. This data stream is then interpreted via a bespoke software suite, such as SkyNet’s own REACH Aero Day Of Operations. Put it all together and the operator can get what they need to know from their aircraft with the highest level of efficiency, reliability and safety.

This also means they can track their aircraft more cost-effectively. Traditionally, a 30-second reporting interval for aircraft positioning would be undertaken with satellite – an expensive undertaking. By rolling the capabilities of ADS-B into the SAA’s positioning solution, SkyNet was able to bring the reporting interval down to under 3 seconds and do so at a fraction of the cost.

Already an established technology, ADS-B is evolving to be more than just what passenger airlines use to monitor their jets at high altitudes over populated areas. Increasingly, the data ADS-B generates can be used by operators like SAA for their unique mission mix.

Standing for Automatic Dependent Surveillance-Broadcast, ADS-B is a flight tracking system wherein aircraft-mounted transponders are fed basic flight status data by onboard avionics. The transponders then continually broadcast this simple live data to be picked up by receivers both on the ground and, less commonly, aboard other aircraft.

When ground receivers pick up this broadcast data, it’s instantly sent to various software platforms, such as REACH Aero Day Of Operations. These platforms then use the data to build an accurate and live representation of the airspace.

ADS-B doesn’t depend on radar, nor does it require the use of interrogation signals on the ground. Rather, it’s consistently on and continually broadcasting.

The only limitation to ADS-B, is the network of ground receivers. In areas where ground receivers haven’t been installed yet – which are typically remote or hostile areas, which are extensive across Scandinavia – other technologies are required to ‘fill the gap’ of the ADS-B’s capabilities.

Yet, by relying on ADS-B first, SkyNet is able to track the Babcock SAA fleet in a robust, cost-effective way. Then, when aircraft stray beyond the 250km radius range of any ADS-B ground receiver, the XDI solution brings satellite, cellular data to the fore to keep an accurate live picture of the airspace on the user’s screens.

XDI as a solution

XDI, or cross data integration, is a methodology for amalgamating various aviation data streams. Not only used for aircraft positioning and tracking data, XDI is fully IATA AIDX-compliant meaning it can be shared across many aviation platforms and can also be used for sub-systems that manage:

Interpreted by the REACH Aero Day Of Operations suite that Babcock is using, this means SAA’s planes are tracked by a robust, to-the-second position reporting platform that covers all of Scandinavia.

Despite being in Norway, SAA’s flight data is all managed via SkyNet’s HQ in Brisbane, Australia. This other-side-of-the-world-and-back processing requires a robust technical support solution – one that SkyNet offers through Amazon Web Services (AWS). By partnering with AWS, SkyNet is able to deliver a secure, scalable technical support solution that has global capability and guaranteed uptime. The resultant processes are robust enough to support Babcock SAA’s positioning solution across eight time zones.

SkyNet’s positioning solution for Babcock SAA is now live and functional. A total of 533 patient movements were controlled by the solution within the first three months of service. This means it has been a resounding success in terms of both implementation and ongoing maintenance.

Furthermore, the XDI solution has laid the groundwork required to offer similar solutions to SkyNet’s other clients.

What can SkyNet do for you?

As world-leaders in aviation XDI and positioning solutions, SkyNet Aviation® are the optimal choice to diagnose, tailor and deliver the fleet tracking and management solutions you need.

So, if you know you need to know more about what your fleet is doing, get in touch today. Talk to us to find out how SkyNet Aviation® can help you fly better and fly safer wherever you are.